How Much Does It Cost to Climb Kilimanjaro?

Well, similarly on Kilimanjaro, you have a wide array of considerations to take into account in order for the answer to the question 'how much?' to be relevant to you.

Time Spent on the Mountain

When first I climbed Kilimanjaro, I was very poor - by Western standards. I wanted passionately to summit Kilimanjaro and yet by the time my shoestring tour of East Africa was nearing its end and my budget was almost depleted, and Kilimanjaro remained to be climbed, I didn't even have enough money to cover the park fees for a climb of conventional length.

The way I solved this problem - since I was already reasonably well acclimatised having within the few weeks prior, climbed the three summits of Mount Kenya, and the three summits of Mount Stanley in the Rwenzori Mountains of Uganda - was by speedclimbing Kilimanjaro in a single day, so that I'd only have to pay the day entrance fee and would have no overnight costs.

This was back in the year 2000, and if my memory is reliable, my very first ascent of Kilimanjaro cost me only USD 45 in park fees, plus the cost of public transport in a dala dala from Arusha to Marangu; pay for my superfit guide, Rogath Ephrem Mtuy, who I think back then ran a marathon in around 2 hours 17 minutes; and the cheapest possible accommodation I could find close to Marangu Gate - sleeping in Mama Happy's garden in my tent, which location pretty much abuts the park boundary.

While it is no longer permissible by the park authorities to visit the summit on a 1-day permit, nonetheless, if a climber wants to economise and has found a way cheaply to acquire aclimatisation to perhaps 4,000 metres, or thereabouts, the cheapest way of climbing Kilimanjaro with TK is to recruit as many friends as possible, to share costs, and opt for our 5 day Superlite Series climb via the Marangu Route.

While even cheaper with 8, realistically, unless you're on special forces selection with a group of friends, it's unlikely you'll probably find more than a couple of friends to join you.

As a group of 3 fit people this option would cost you just USD 1,352 to climb Kilimanjaro!

But again, you'd need to bear in mind, that if not already acclimatised to at least 3,000 metres, and preferably closer to 4,000, which can usually be done a great deal more cheaply elsewhere than on Kilimanjaro - it is unlikely that you'll summit and you're likely to succumb to Acute Mountain Sickness and have to abort your attempt, making this option a clear case of false economy.

And although USD 1,352 is cheap to summit by Kilimanjaro's standards, bear in mind that one can spend around 15 days in the Everest Region of Nepal, reaching a similar altitude on Kala Pattar, and going to Everest Base Camp with our sister operation, for a little over USD 1,500 - and this includes food and lodging, guides' and porters' wages, and all national park entrance fees.

So, why is climbing Kilimanjaro so expensive?

The main reason why climbing Kilimanjaro is so expensive, is because the government charges very high park fees to visitors. These are charged on the basis of how long you spend within the national park boundary and are calculated as follows:

These all add up to quite a considerable sum. One of our popular climbs is an 8 day TK Lemosho Excel Series climb.

On this itinerary, the park fees alone for just 1 climber are therefore USD 1,239! When considering that on top of this are the following costs, it becomes easier to see why it's so expensive to climb Kilimanjaro, when compared with climbing mountains in most other countries.

Additional Components of a Kilimanjaro Climb

Ethos of the Climbing Group

While a Superlite climb is certainly the cheapest way to summit with TK, and there after few cheaper methods elsewhere either, some people with the financial means to use a higher level of support nonetheless enjoy the more 'purist' mentality of a Superlite climb. I think there's simultaneously a growing trend in two entirely opposing directions:

There are those who realise that when they die they're not going to be able to take anything with them, and - unless they're religious - since they're only going to live once, life is more meaningfully defined by the quality of experiences enjoyed than the size of the stockpile of resources they leave behind, and so they're opting to spare no expense on the climb and enjoy it to the maximum degree possible, with a double bed and cuisine prepared by a Michelin Star chef - as is enjoyed on a Team Kilimanjaro Hemingway Series climb.... 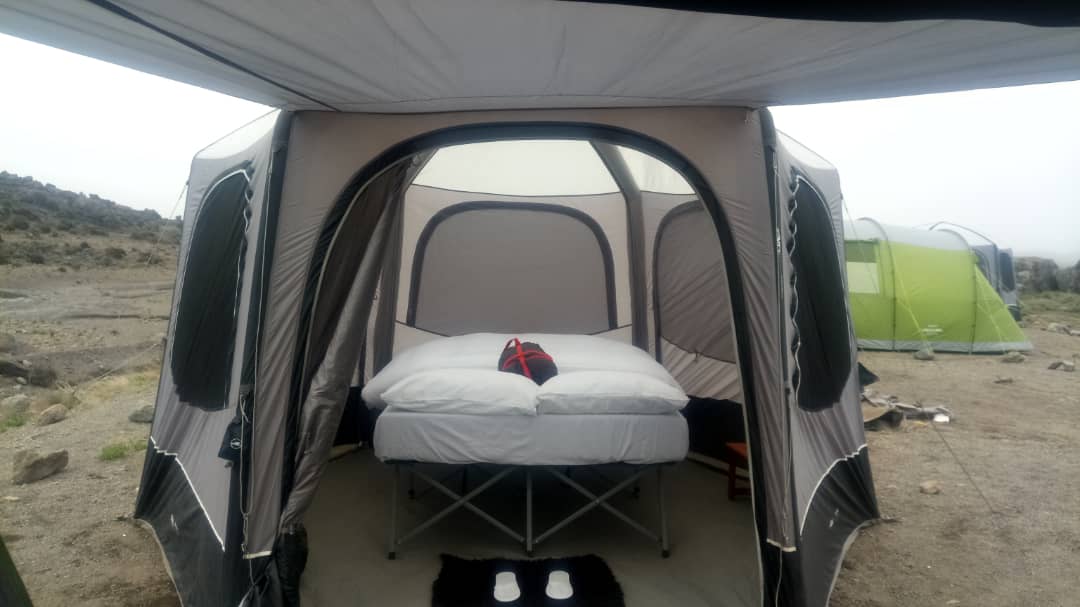 A double bed for 1 person on a Hemingway climb

And yet equally, there are those who feel that their lives have perhaps been characterised by rather too much consumption and unnecessary complication already, and they feel drawn towards a more 'minimalistic' way of living their lives - rooting through their bulging wardrobes and ruthlessly giving as much away to charity shops and freeing their lives and minds from distracting clutter in the hope of being able to better focus on the important things of live; and these people will often feel more ideologically predisposed towards a Superlite climb on which, for a group of three friends, there will be only two members of TK staff versus the 42 staff that support a Hemingway 3 person climb! 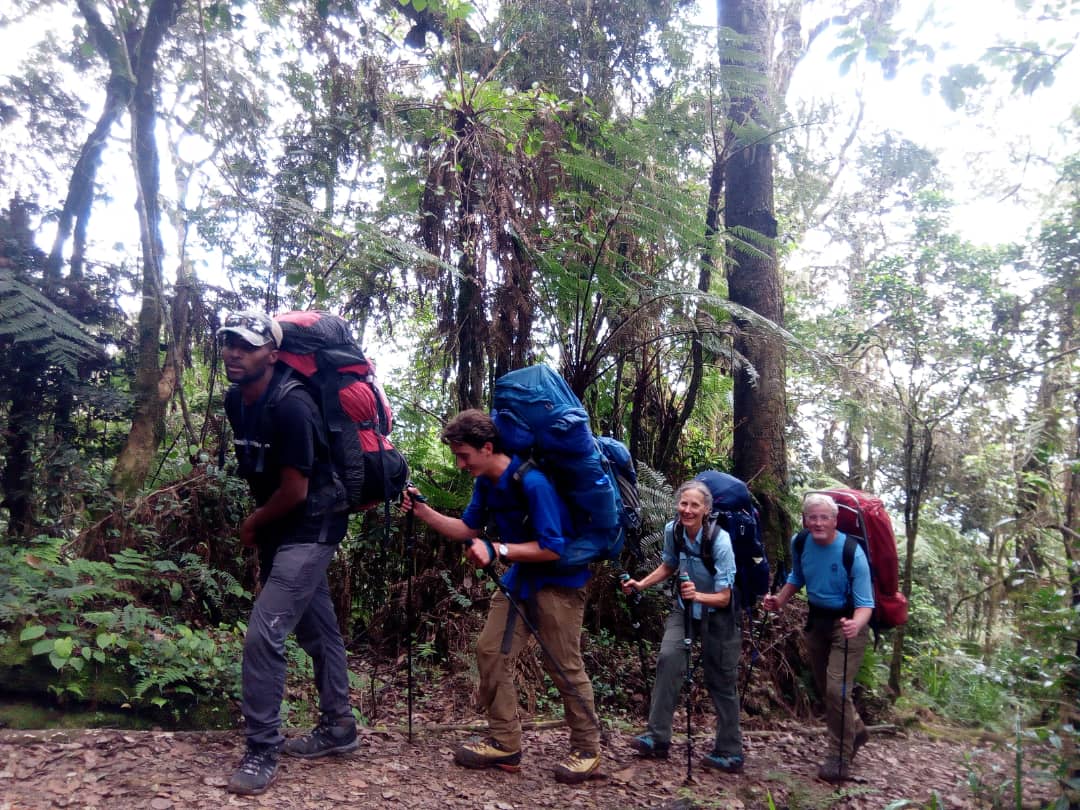 Climbers carrying all their own gear on a Superlite climb

And of course, this distinction in support level is perhaps the most significant criterion that affects price.

Within the last few weeks, we have run two very different kinds of climbs. One had thirty friends from the USA and it was assisted by 105 members of our staff, and yet the other, with only four friends climbing together, was supported by a quite extraordinary 59 members of our staff! This distinction was caused entirely by the climb groups' respective preferences for different suppoort levels.

On a climb with the maximum conceivable level of support possible, required to carry bath tubs, double beds, etc, the price to climb Kilimanjaro on the Hemingway Series could be as much as USD 8,556 per person if climbing solo!

However, having looked at two extremes - the extremely minimalistic 'Superlite' series, and the extremely luxurious (by wilderness standards) 'Hemingway' series, the reality is that perhaps 8-9 out of every 10 people who climb with us will opt for what most already consider somewhat luxurious, in that we use mess tents, and have three course meals with tables and chairs, and bring along our own portable toilets; the 'Advantage' series. This is configured to minimise any unnecessary duress on the climber's body, in order to maximise the factors of hydration, nutrition and good rest - which all contribute very significantly to the acquisition of acclimatisation - hopefully without eating into one's children's inheritance.

For three friends to climb Kilimanjaro on the 7 day TK Lemosho route, using the Advantage series, costs USD 2,676 per person.

This leaves us with only one other category: those who want to be quite lightweight, but who are not as extreme in their pursuit of minimalism as the 'Superlite' crowd. For these climbers we have configured our 'Lite' series.

For four friends to climb the 6 day TK Rongai route on the Lite series costs USD 2,101 per person.

Climbing with TK there's something for everything. We hope this post helps you decide what will work best for you if one day you decide to climb! 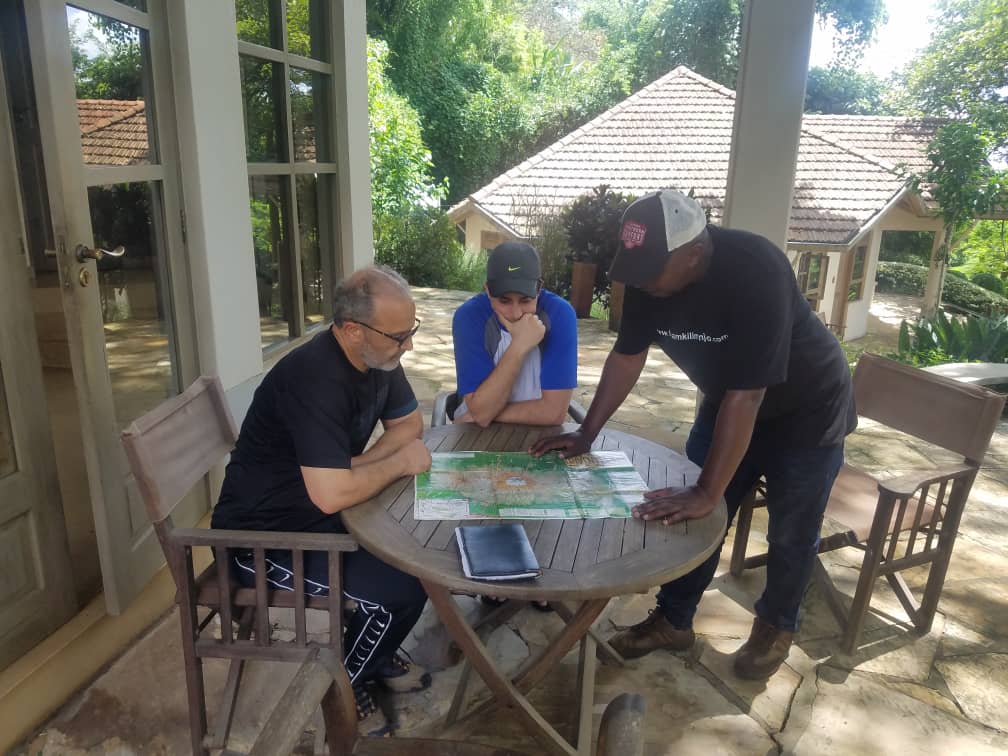